skip to main | skip to sidebar

20 Films you must see

The novels you must read : -

1. Paths of Victory - Bob Dylan
2. This Land is your Land - Woody Guthrie
3. Navigator - Pogues
4. Owenboro - Natalie Marchant
5. Tramp the dirt down - Elvis Costello
6. Everybody knows - Leonard Cohen
7. People get ready - Curtis Mayfield
8. Stand down Margaret - The Beat
9. San Quentin - Johnny Cash
10. There is power in a union - Billy Bragg
11. Ghost town - The Specials
12. Which side are you on? - Pete Seeger
13. Change is gonna come - Sam Cooke
14. Southern accents - Tom Petty and the Hearbreakers
15. Southern man - Neil Young
16. No more heroes - Stanglers
17. Another revolutionary - Eddie Grant
18. The story of the blues - Wah
19. Holidays in the sun - Sex Pistols
20. The Ballad of Ira Hayes - Peter LaFarge
Posted by Paul Holmes at 10:21 No comments: 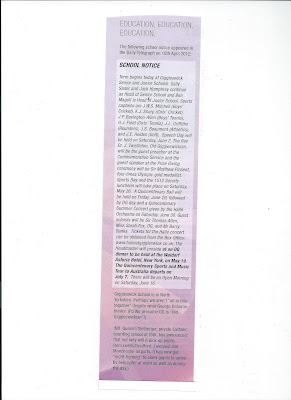 Kirklees Unison sponsoring Underbank Rangers Rugby League Football Club, using the Rubgy League's anti-racism campaign "Racism - Tackle it". (Paul Holmes is the one not wearing a rugby shirt - just in case you thought he was one of the players!) 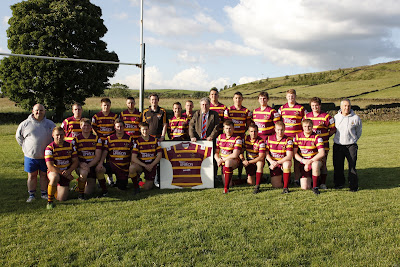 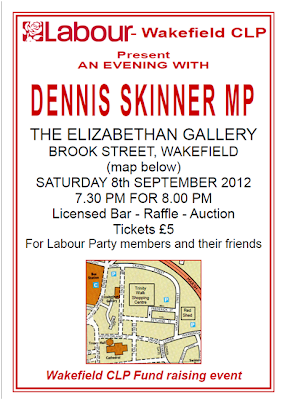 I went to Topuddle on 15th July 2012. We must never forget our history - we hear enough of theirs. 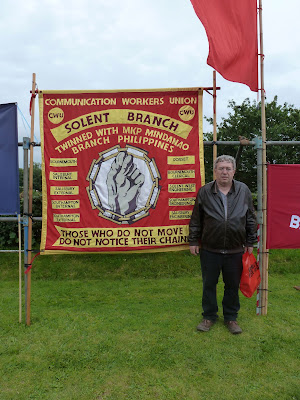 The six Tolpuddle Martyrs returned from hard labour in Australia in the 1830's. Eventually five of them emigrated to Canada and one, James Hammett, stayed in Tolpuddle. He died in the workhouse there in 1891. When they buried him in Tolpuddle church yard, the squire stood by the grave to make sure that no one spoke for, or on behalf of, trade unionism. The bosses' vindictiveness knows no bounds.

In 1844 the miners of Northumberland and Durham struck. As the majority of them lived in tied housing, the coal owners evicted whole villages in their efforts to break the union.

'Pregnant women, bed-ridden men, children in the cradle, remorselessly turned out ..... the breaking of their furniture to pieces and the throwing of their household goods, with their food, into the road ..... aged, sick and feeble women forced from the homes of their childhood .... the cruel eviction of men who had met with accidents in the pit before the strike commenced. When starving and homeless the workhouses were closed to them and the Marquis issued a notice forbidding the local tradesmen to give credit or supplies to the miners and their families" - Richard Fynes.

These are the people that built the trade unions. They built them with courage, fortitude and vision.

Here is the banner of Follonsby Lodge (Wardley), Durham. The men who appeared on the banner were voted there by the members in a ballot. James Connolly, Keir Hardie, Lenin, AJ Cook and George Harvey (local Miners' Assocation official, known popularly as Wardley's Lenin). Stanley Baldwin, Tory Prime Minister in the 1920s, when working people on strike were accused of fighting a class war, replied that he couldn't say anything because "we started the class war 100 years ago". 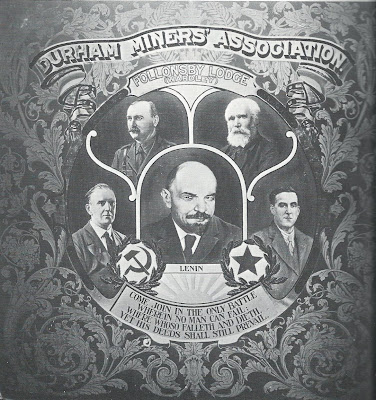 ﻿
When George Loveless, Tolpuddle Martyr, was being escorted to prison by guards, he threw a scrap of paper to the crowd with a poem written on it. The last two lines of the poem read:
"The cry goes out for liberty,
We will, we will, we will be free."

On the shoulders of such giants do we stand.
Posted by Paul Holmes at 13:14 No comments: